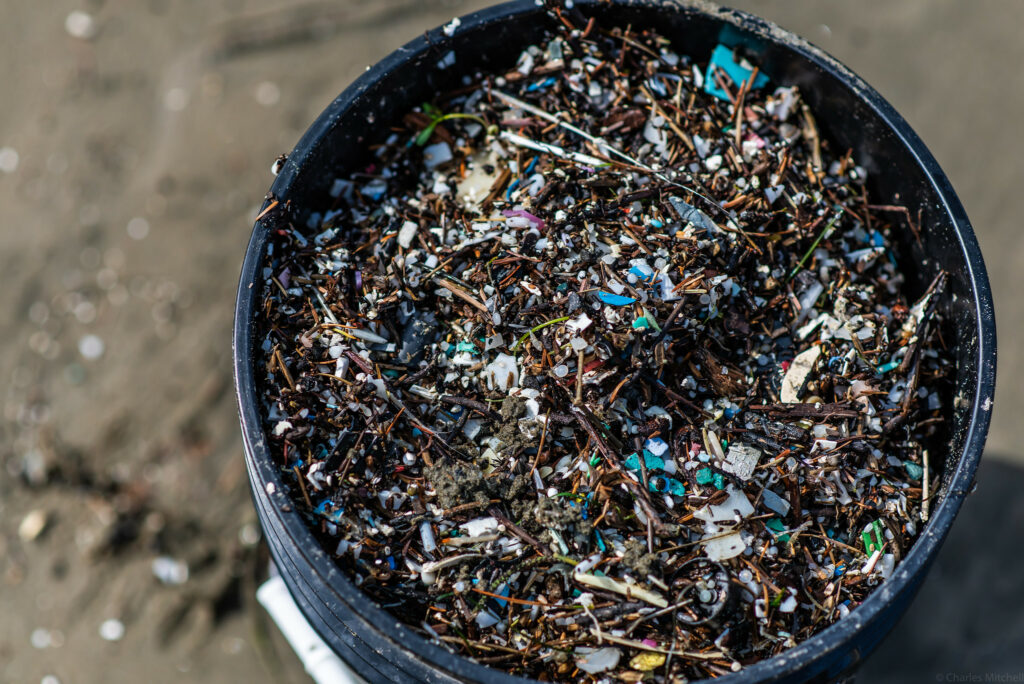 Plastic degrades very slowly and emissions of plastic to the environment only continue. Plastic is therefore a “poorly reversible pollutant”, the authors conclude.  Photo by Charles Mitchell / Flickr

The understanding of the geophysical, ecological and (eco)toxicological impacts of plastic pollution is complex, but already initial impacts are being observed. Plastic pollution in many key environments is increasing, and its presence there irreversible. Should impacts continue to expand in these key environments, their impact too will be irreversible. Due to the global nature of plastic pollution, such impacts could be global. Therefore, global, preventative action is needed to prevent both known and unknown threats.

“Right now, we are loading up the environment with increasing amounts of poorly reversible plastic pollution. So far, we don’t see widespread evidence of bad consequences, but if weathering plastic triggers a really bad effect we are not likely to be able to reverse it. The cost of ignoring the accumulation of persistent plastic pollution in the environment could be enormous. The rational thing to do is to act as quickly as we can to reduce emissions of plastic to the environment.”

The global threat from plastic pollution

Current rates of plastic emissions globally may trigger effects that we will not be able to reverse, because once emitted in many areas, plastic cannot be remediated or removed. This is particularly the case for plastic degradation products and remote or hard to reach environments like the deep sea and water column, but also for urban soils and biological tissues. Therefore plastic pollution is a global threat, and actions to drastically reduce emissions of plastic to the environment are the rational policy response.

Plastic is found everywhere on the planet and emission rates are expected to almost double by every 10 years if business-as-usual scenarios apply. Plastic is deeply engrained in our society, and it leaks out into the environment everywhere, even in countries with good waste-handling infrastructure. Emissions are trending upward even though awareness about plastic pollution among scientists and the public has increased significantly in recent years. Solutions currently on offer, such as recycling and clean-up technologies, are not sufficient and we must tackle the problem at its root.

Plastic accumulates in the environment when amounts emitted exceed those that are removed by clean-up initiatives and natural environmental processes, which occurs by a multi-step process known as weathering. Weathering of plastic happens because of many different processes, and weathering is constantly changing the properties of plastic pollution, which opens new doors to more questions regarding their impacts. Plastic degradation is very slow and not effective in stopping accumulation, so exposure to weathered plastic will only increase. Plastic is therefore a “poorly reversible pollutant”, both because of its continuous emissions and environmental persistence.

Remote environments are particularly under threat. In remote environments, plastic debris cannot be removed by clean-ups, and weathering of large plastic items will inevitably result in the generation of large numbers of micro- and nanoplastic particles as well as leaching of chemicals that were intentionally added to the plastic and other chemicals that break off the plastic polymer backbone. So, plastic in the environment is a constantly moving target of increasing complexity and mobility. Where it accumulates and what effects it may cause is challenging or maybe even impossible to predict.

On top of the environmental damage that plastic pollution can cause on its own by entanglement of animals and toxic effects, it can also act in conjunction with other environmental stressors in remote areas to trigger wide-ranging or even global effects, such as impacts on carbon and nutrient cycling. This new study lays out a number of hypothetical examples of possible effects, including exacerbation of climate change because of disruption of the global carbon pump, and biodiversity loss in the ocean where plastic pollution acts as additional stressor to overfishing, ongoing habitat loss caused by changes in water temperatures, nutrient supply and chemical exposure.

From this analysis, it must be assumed that plastic being emitted today may trigger global-scale, poorly reversible impacts in the future. These foreseeable and unforeseeable future threats are compelling motivation for tailored actions to strongly reduce emissions immediately.

“The world promotes technological solutions for recycling and to remove plastic from the environment. As consumers, we believe that when we properly separate our plastic trash, all of it will magically be recycled without considering the environmental cost of transportation and recycling. Technologically, recycling of plastic has many limitations, and countries that have good infrastructures have been exporting their plastic waste to countries with worse facilities. Reducing emissions requires drastic actions, like capping the production of virgin plastic to increase the value of recycled plastic, and banning export of plastic waste unless it is to a country with better recycling” – Mine B. Tekman

The full article is available here (not open access)